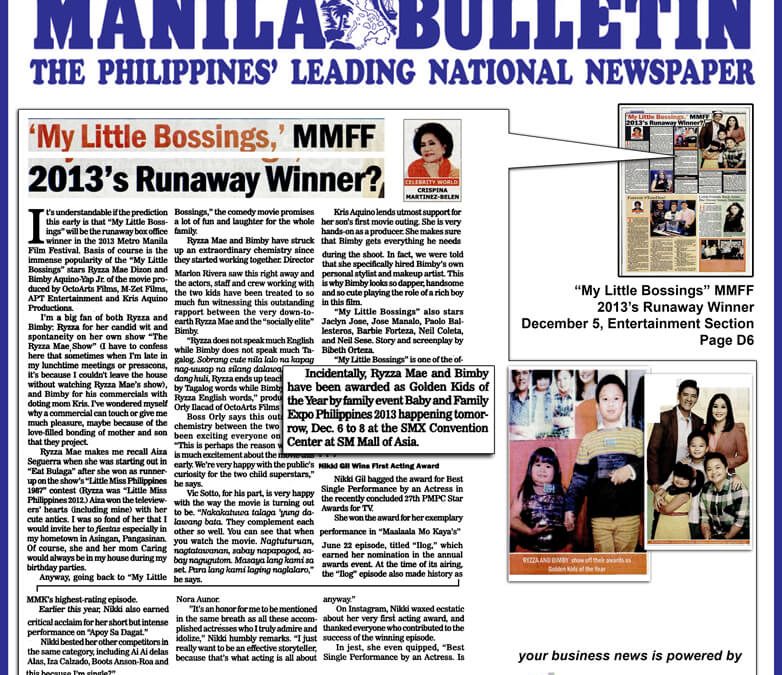 It’s understandable if the prediction this early is that “My Little Bossings” will be the runaway box office winner in the 2013 Metro Manila Film Festival. The basis, of course, is the immense popularity of the “My Little Bossings” stars Ryzza Mae Dizon and Bimby Aquino Yap Jr. of the movie produced by OctoArts Films, MZet Films, APT Entertainment, and Kris Aquino Productions. I’m a big fan of both Ryzza and Bimby: Ryzza for her candid wit and spontaneity on her own show “The Ryzza Mae Show” (I have to confess here that sometimes when I’m late in my lunchtime meetings or presscons, it’s because I couldn’t leave the house without watching Ryzza Mae’s show), and Bimby for his commercials with doting mom Kris. I’ve wondered myself why a commercial can touch or give me much pleasure, maybe because of the love-filled bonding of mother and son that they project Ryzza Mae makes me recall Aiza Seguerra when she was starting out in “Eat Bulaga” after she won as runner-up on the show’s “Little Miss Philippines 1987” contest (Ryzza was “Little Miss Philippines 2012.) Aiza won the televiewers’ hearts (including mine) with her cute antics. I was so fond of her that I would invite her to fiestas especially in my hometown in Asingan, Pangasinan.  Of course, she and her mom Caring would always be at my house during my birthday parties.

Anyway, going back to “My Little Bossings,” the comedy movie promises a lot of Am and laughter for the whole family. Ryzza Mae and Bimby have struck up an extraordinary chemistry since they started working together. Director Marlon Rivera saw this right away and the actors, staff, and crew working with the two kids have been treated to so much fun witnessing this outstanding rapport between the very down to earth Ryzza Mae and the “socially elite” Bimby.

Boss Orly says this outstanding chemistry between the two kids has been exciting everyone on the set. “This is perhaps the reason why there is much excitement about the movie this early. We’re very happy with the public’s curiosity for the two child superstars,” he says.

Vic Sotto, for his part, is very happy with the way the movie is turning out to be. “Nakakatuwa talaga ‘yung dalawang bata. They complement each other so well. You can see that when you watch the movie. Nagtuturuan, nagtatawanan, sabay napapagod, sabay nagugutom. Masaya long kami sa set. Para lang kami laging naglalaro,” he says.

Kris Aquino lends utmost support for her son’s first movie outing. She is very hands-on as a producer. She makes sure that Bimby gets everything he needs during the shoot. In fact, we were told that she specifically hired Bimby’s own personal stylist and makeup artist. This is why Bimby looks so dapper, handsome and so cute playing the role of a rich boy in this film.

Incidentally, Ryzza Mae and Bimby have been awarded as Golden Kids of the Year by family event Baby and FamilyExpo Philippines 2013 happening tomorrow, Dec. 6 to 8 at the SMX Convention Center at SM Mall of Asia.